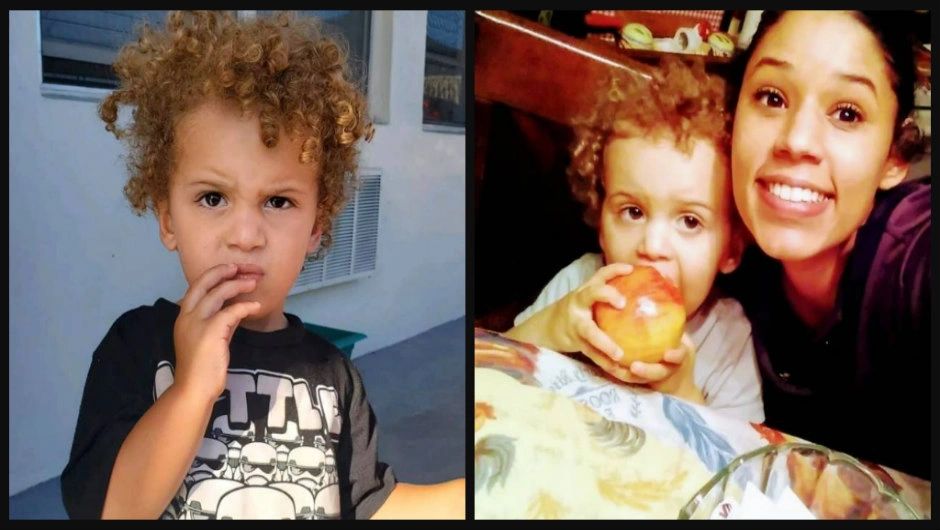 On July 26, 2020 The Miramar Police Department posted a plea on their Facebook page to identify a toddler boy, estimated to be between the ages of 2 and 3, and still in diapers.  He had been found wandering alone at an apartment complex in Miramar Florida wearing just a diaper and a t-shirt.   Throughout the day comments begun to appear that people recognized the child as a young boy named Kamdyn.  He lives in Georgia with his mother, their family lives in Jasper, Alabama.

His mother has been identified as Leila Cavett, and she was last seen driving a white Chevrolet 3500 with a maroon/red tailgate and a baby on board sign in the window.  Friends and family say she would never abandon Kamdyn.  The Miramar Police department is actively looking for her.  Leila Cavett has no known ties to Florida.  She is 5'4' tall and has a tattoo of the name Kamdyn on her right arm and a Jesus fish symbol on her right wrist.

The last known sighting of Leila Cavett is believed to be in the Miami area on Sunday July 26 in the morning hours before Kamdyn was found.  her family was unaware of a reason she would be in Florida, though she had been recently selling items online.  No link has been made between the two.

If you have any information about Leila Cavett or her whereabouts, contact the Miramar Police Department at 954-602-4000.

Leila and Kamdyn are seen together on surveillance video at a Cracker Barrell located in Vero Beach Florida.   There does not appear to be anyone with them at the Cracker Barrell.  Authorities released the below image of Leila and Kamdyn at the restaurant on July 24.   She can be seen wearing floral pants and a solid color tank top.

It would later be reported that an employee at the Racetrack gas station noticed a pair of floral pants in the dumpster after noting that Shannon Ryan had dumped a large amount of items in it from the back of a pick up truck similar to Leila's.  The employee also noted they spotted children's toys in the dumpster.

Leila is seen at about 3:00 p.m. at a Racetrack gas station parking lot, getting in and out of a Lexus  Sedan.  Authorities released a series of stills from surveillance video from the Racetrack and those are posted below.  During the afternoon visit she is wearing a tank top and shorts.

She returned to the Racetrack Gas station and was seen on surveillance again at about 10:30 pm carrying Kamdyn and making a purchase inside the store.  The photos of Leila in the dress are from the night time visit.

These  are the last known sightings of Leila Cavett.  The gas station video can be viewed below.

It is ordered by the court that Shannon Demar Ryan is a flight risk and also is deemed a danger to the public.  He is ordered to be held on remand.

The court filing can be found below.

Gas station surveillance video from the Racetrack station in Florida on the last day Leila Cavett was known to be seen alive.

A young child was found wandering alone near an apartment complex around 1860 b/w SW 68th St in Hollywood Florida in the early morning hours.

The Miramar Police department released photos of the child and later learned the was the son of Leila Cavett, his name is Kamdyn and he was only 2 years old when he was found. He was reported to be dirty but in good overall health.

It was found that he lived with his mother Lelila Cavett in Davenport Georgia and had lived near family in Alabama in the past.  Leila's family did not know why she would be in Florida with Kamdyn nor had they heard from her since he was found alone.

Leila's truck was found in a Walmart parking lot near Hollywood Florida.  The drivers side window was broken, and there were 2  shovels found in the back of the truck with a redish substance on them.  White powder was found on the floor of the truck.

A man Shannon Ryan was later accused of dumping Kamdyn at the apartment complex as his car, a Lexus sedan, was seen on surveillance video in the area.   The full accusations are listed in the Arrest affidavit posted in the legal documents below.

A media group reports that the Sheriff states they have made contact with Leila Cavett and that this is a child abandonment case.

This is later retracted by the media group that reported it but not before causing public outcry and confusion on the case.

Shannon Ryan posts photos to his Facebook page of MIramar police searching his vehicle.  In one photo you can see what looks to be Leila's truck in the background.  You can see these photos posted below.

He includes a rant about how they already illegally detained him for questioning and how he does not know what they are investigating him for.   He says he is in Dallas at the time this post was made but states he will return to Florida and speak with investigators.

We later learned from the arrest affidavit that they found trash bags and carpet powder in the Lexus, which were purchased by Shannon the night before Kamdyn was found at the Walmart where Leila's truck was found.

Shannon Ryan, a man who has been speculated to be linked to Leila Cavett posted a live video to his Facebook page telling his side of how he came to know Leila and when he last saw her.  He believes he is a witch and speaks a lot of being spiritual.   The full 50 minute video can be seen below.

He claims she was there to sell him her truck for $3,000, a claim that is not believed by many as Leila just got the truck and it was not even titled in her name but in the name of her uncle.

It should be noted that Shannon Ryan drives a silver Lexus Sedan with the front bumper missing . The car is not registered to him but he is known to drive it.  This is similar to the car seen on the Racetrack surveillance footage.

Shannon Ryan Talks about Leila Cavett on a live video posted to his personal Facebook page. He speaks of how they met and his relationship with her.

Shannon Ryan is arrested on charges related to the dumping of Kamdyn.  None of his charges are related to Leila, however it appears from the Arrest Affidavit there is reason to believe she met foul play.

He was seen in the area of where Kamdyn was left just moments before he was found. He claims he was checking a flat tire.

The evidence such as shovels, and broken drivers side window lean towards foul play when combined with the purchases of carpet powder and trash bags.

Shannon Ryan purports himself as a witch and it is believed Leila may have gone to meet him as his apprentice.

Shannon Ryan appears for the first time in court. He invokes his right to remain silent and his right to council.

He is remanded in custody.  This is when the public learns that Shannon Ryan tells a story of how he was going to purchase Leila's truck and her and Kamdyn got into another car and were not seen since.

We learn about the shovels in the back of the truck with the blood evidence and the broken drivers side window.

Racetrack employees remembered seeing Shannon by the dumpster and saw children's toys inside it.  Records show Shannon Ryan used the debit card of someone he knows to purchase trash bags and odor eliminator.

The commercial dumpsters  at the Racetrack gas station in Hollywood are removed.

We know from the Arrest Affidavit that Shannon Ryan searched online for commercial pick up times of dumpsters in the area and that an employee say him dump clothing and kids toys in the Racetrack dumpster, including a pair of floral pants suspected to be Leila's.

The court deems Shannon Ryan as a danger to the public and a flight risk and orders him to be remanded to custody.  The order for remand can be found in legal documents below.

Law enforcement is searching the Monarch Hill Landfill in Pompano Beach Florida in the case of Leila Cavett. This comes after the Racetrack dumpster was removed.

Its clear authorities are searching for her remains, the search has lasted several days, with nothing of interest being reported yet as resulting from it.