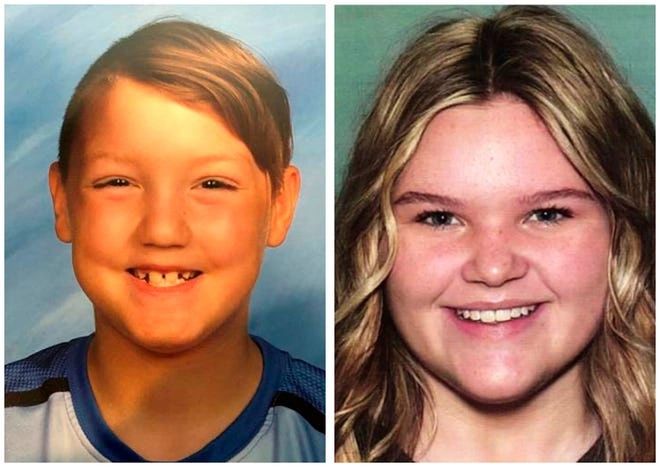 The bodies of Tylee Ryan and JJ Vallow have been found on the property of Chad Daybell.  Tylee's remains had been burned while JJ's were found wrapped in plastic and buried.  Their causes of death have not been released at this time.

Lori Vallow-Daybell currently remains in jail in Idaho on 1 million dollars bond for desertion, while 3 misdemeanor charges have been added after the remains were found. She has not yet been charged with murder in their deaths.

Chad Daybell is in jail as well on charges related to the hiding of the bodies, however like Lori, he has not been charged in the deaths of the children.

Tylee Ryan and JJ Vallow have not been seen since September 23, 2019. in Rexburg Idaho.

On September 24, 2019, Lori Vallow, the adopted mother of autistic 7 year old JJ Vallow, un-enrolled JJ from the school he was enrolled in.  The children were never reported missing.

On November 26, a welfare check was performed by request of a family member at the families home.  At this time Chad Daybell and Lori Vallow claimed that JJ (Joshua) was staying with a family friend in Arizona.   The next day authorities verified he was not staying there.

On December 20, 2019 authorities in Rexburg Announced that they were searching for Tylee and JJ, and that Lori Vallow and her current husband Chad Daybell were persons of interest in their disappearance.

Lori Vallow is no stranger to suspicious deaths in her life.   In fact deaths seem to feature prominently in her recent life.  Her former husband Charles Vallow,and JJ's adopted father, was shot and killed by her brother, Alex Cox, inside the families home in Chandler, Arizona.  No charges were filed against Alex Cox as it was treated as self defense. This was on July 11, 2019.

On December 11, 2019 Alex Cox was found dead in his home in Gilbert Arizona.

Chad Daybell's wife Tamara was found dead on October 19, 2019 and her death was initially deemed of natural causes.  They exhumed her remains in December after a subsequent investigation deemed her death as suspicious.

Lori has a third child Colby Ryan, who has pleaded for his mother to return from Hawaii where she now resides with Her husband, Chad Daybell.  Colby has also referred to  his mother as unstable.

We will continue to follow and update this case as more information comes out.

Update: Lori Vallow is now in custody in Hawaii on 5 Million dollar bond. She is contesting her extradition to Idaho.

You can watch her first hearing in the case files.

Lori Vallow, after trying a second time to get her 5 million dollar bond reduced waived extradition to Idaho.  Chard Daybell has left Hawaii for Idaho.

Tylees Cell phone was found to be in Lori Daybells possession in Hawaii where she now resides, early February 2020.  On it was found 2 venmo payments on October 10, and 16. This is after the children were last seen.

On Octber 26, about one month after Tylee went missing, a text went out from her phone to  a friend.

The friend has estimated the test didnt sound like her.

Press release about the arrest of Lori Vallow.

Press conference regarding the arrest of Lori Vallow.

Lori Vallow's Court hearing regarding extradition and bail.  Lori will be held on 5 million dollars bail.  Her next hearing will be March 2, 2020.